How a missed $400 homeowners association dues payment escalated into foreclosure and eviction in Texas. 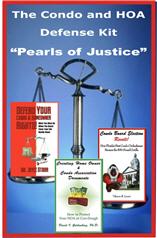 A Texas homeowner missed a $400 payment to his homeowners association – which soon mushroomed into an additional $3000/plus in legal fees and interest, foreclosure and finally, eviction.

Here’s the email received from the homeowner:

“Hi, I am writing to you about the my homeowners association. I have been working out of the country or out of the city for most of the year last year. I owed the home owners association $400 and by the time I realized their was a problem, they had turned it over to their attorneys, and instead of owing $400 the bill was several thousand dollars. I had been in contact with their attorneys less than two weeks ago trying to negotiate a fair settlement. I had to go back out of town, and when I returned Wednesday night I had an eviction notice on my door. The HOA had foreclosed on my home, sold it in an auction, and now I am being evicted from my home over an $400 original bill. I am not behind on my house payments, but now I will be evicted from my home because their is no oversight on home owners associations by the government to keep HOAs from abusing people. Please address this issue, because I understand that about 30 others were done the same way as me.”

Dr. Goldenberg argued that the owner:

1) Had a legal responsibility to read and understand his obligations as set forth in  his homeowner association documents;

2) Should have alerted the HOA that he would be traveling and arrange for some form of ongoing communications;

3) Should have arranged automatic payments from his bank or immediately paid the past due amount before it escalated out of control.

An HOA or condo has a legal responsibility to demand delinquent payments in writing within a specific time frame, in order to prevent economic collapse. However, I pointed out that while Associations are justified in leveling fines for delinquent payments, excessive legal fees make it impossible for owners to catch up. The owner in question would have gladly paid the $400 and even the fine. He could not pay $3000 in legal fees and interest. As a result, he was foreclosed and evicted. Dr. Goldenberg recalled the Admiral who failed to pay his Association dues because he had been kidnapped and was being held captive! Unsympathetic judges ruled against the unlucky Admiral, and he lost his home!