Ode to the American Spirit. 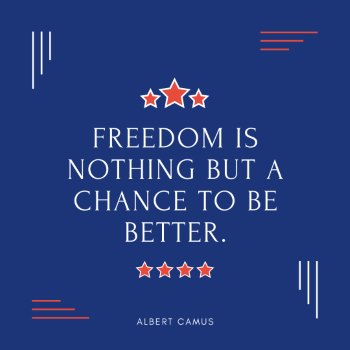 We started this column mid-year, but just in time for the November 2020 election.

“John Lewis — the first of the Freedom Riders, head of the Student Nonviolent Coordinating Committee, youngest speaker at the March on Washington, leader of the march from Selma to Montgomery, Member of Congress representing the people of this state and this district for 33 years, mentor to young people, including me at the time, until his final day on this Earth — he not only embraced that responsibility, but he made it his life’s work…Like John the Baptist preparing the way, like those Old Testament prophets speaking truth to kings, John Lewis did not hesitate — he kept on getting on board buses and sitting at lunch counters, got his mugshot taken again and again, marched again and again on a mission to change America. And yet, as exceptional as John was, here’s the thing: John never believed that what he did was more than any citizen of this country can do.

“He believed that in all of us, there exists the capacity for great courage, that in all of us there is a longing to do what’s right, that in all of us there is a willingness to love all people, and to extend to them their God-given rights to dignity and respect. So many of us lose that sense. It’s taught out of us. We start feeling as if, in fact, that we can’t afford to extend kindness or decency to other people. That we’re better off if we are above other people and looking down on them, and so often that’s encouraged in our culture. But John always saw the best in us. And he never gave up, and never stopped speaking out because he saw the best in us. He believed in us even when we didn’t believe in ourselves. As a Congressman, he didn’t rest; he kept getting himself arrested. As an old man, he didn’t sit out any fight; he sat in, all night long, on the floor of the United States Capitol. I know his staff was stressed.

But the testing of his faith produced perseverance. He knew that the march is not yet over, that the race is not yet won, that we have not yet reached that blessed destination where we are judged by the content of our character. He knew from his own life that progress is fragile; that we have to be vigilant against the darker currents of this country’s history, of our own history, with their whirlpools of violence and hatred and despair that can always rise again.” – President Barack Obama, Eulogy for John Lewis, July 30, 2020.

“As America tops 4 million COVID cases, the cult of Donald Trump has become a death cult. People who refuse to wear a mask are bolstering their sore egos. Their national motto is not ‘E Pluribus Unum,’ it’s ‘You’re not the boss of me…They will likely still believe that even as they lie in a hospital bed and are given last rites with a ventilator down their throats.” – Tom Nichols, USA Today columnist, July 25 2020, Author, “The Death of Expertise” –  Twitter: @RadioFreeTom

“Obama didn’t brag half as much about winning a Nobel Peace Prize as Trump is about passing a dementia test.” –  Twitter: @ChrisLu44

“If a hospital worker can wear a mask nonstop during a 10-hour shift.  If women can wear masks during labor. You can wear a mask while running an errand.” –  Andrew Cuomo Twitter: @NYGovCuomo

Civil rights hero/legend Congressman John Lewis passed this week. “Invictus” – a poem by Englishman William Ernest Henley published in 1888 – was among his favorites. Winston Churchill paraphrased the last two lines in a speech to the House of Commons on September 9, 1941, stating: “We are still masters of our fate. We still are captains of our souls.” Could there be a more timely political message for Americans today?

Out of the night that covers me
Black as the pit from pole to pole,
I thank whatever gods may be
For my unconquerable soul.

In the fell clutch of circumstance,
I have not winced nor cried aloud.
Under the bludgeonings of chance
My head is bloody, but unbowed.

Beyond this place of wrath and tears
Looms but the Horror of the shade,
And yet the menace of the years
Finds, and shall find, me unafraid.

It matters not how strait the gate,
How charged with punishments the scroll,
I am the master of my fate:
I am the captain of my soul.

In a 7-2 decision, the Supreme Court ruled that Donald Trump is not above the law. Stating that a New York grand jury may receive the president’s financial records and tax returns, the decision was a milestone victory for Manhattan district attorney Cy Vance. Chief Justice John Roberts wrote, “In our system, the public has a right to every man’s evidence,” and “since the founding of the Republic, every man has included the President of the United States.”

July 5 – The Most Wretched Man

Our political quote winner is, once again, Lincoln Project founder Steve Schmidt: “Trump is the most wretched man to ever become President and his vile reign has cloaked America in a shared national misery. Mass Death, Economic collapse, division and a profound betrayal of the US Military are his fetid legacy. His Presidency is ending soon. He stands as a colossus of malfeasance, incompetence, ineptitude, delusion and malice. The worst President in American history will be his eternal Epithet. His name will be a synonym for failure and toxic stupidity. His incompetence is lethal.” – Twitter: @SteveSchmidtSES  …How sweet it is!

This week, the anti-Trump Lincoln Project surfaced pro-Biden statements by Senator Lyndsey Graham in the following video. As a Twitter viewer eloquently commented: “Holy cow – this …exposes Lindsey for being a colossal hypocrite while he’s desperately trying to get re-elected and hold his Senate seat. Delicious! Brilliant!” – Twitter: @wincrasher2007

Tulsa Rally Flop: President Donald Trump was trumped and humiliated by Mary Jo Laupp, a 51-year-old grandmother who posted a video request on TikTok. “All of those of us that want to see this 19,000 seat auditorium barely filled or completely empty go reserve tickets now and leave him standing alone there on the stage.” Furious that the rally was originally scheduled for Juneteenth, a holiday commemorating the end of slavery, she asked her 1000 followers to purchase tickets but fail to attend. It snowballed from there. Trump bragged that over 1 million people would show up. Laupp caused more damage to his re-election with a single sentence than all the anti-Trump books combined. #TikTokTrump

“Trump’s ignorance flows like a mighty deluge. It is breathtaking. His innate malice combines with an inherent laziness and weakness to form an almost unstoppable tsunami of stupidity and offensiveness. Today he praised the SS. His ignorance is not exculpatory. What a disgrace.” – Steve Schmidt – Twitter: @SteveSchmidtSES on Twitter.

“Trump’s lying, his self-regard, his self-soothing, his lack of empathy, his narcissistic rage, his contempt for norms, rules, laws, facts and simple truths — have all come home to roost.” – George Conway – @gtconway3d, WAPO, June 5, 2020

Jesus Era Boat on the Sea of Galilee – Holyland Journal