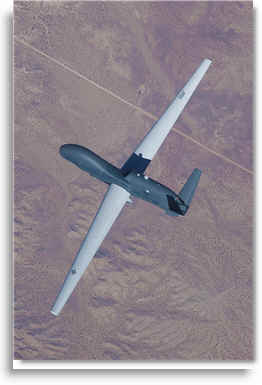 Northrop Grumman’s unmanned Global Hawk is the most majestic, powerful, life-saving aircraft on earth – or in the stratosphere – with a wingspan slightly greater than a 757 cargo-liner!

My guest is Edward A. Walby, director of business development for the High Altitude Long Endurance (HALE) Systems Enterprise. Mr. Walby joined the Northrop Grumman Global Hawk team in San Diego after retiring from the United States Air Force in October 2002, where he headed the Sensors and Platforms Division for all Air Force surveillance and reconnaissance systems.

He has over 4,500 flight hours in various aircraft, with 150 in U-2 combat missions. A graduate of the Air War College, Air Command and Staff College, and the University of Southern California, Mr. Walby holds master’s degrees in aerospace engineering and strategic studies. His military awards include the Meritorious Service Medal, the Air Medal, the Legion of Merit and the Bronze Star.

A STRATEGIC PLATFORM WITH TACTICAL CAPABILITY: The Global Hawk is revolutionizing disaster intervention, firefighting, hurricane assistance and homeland security.  It’s the first unmanned aircraft: to be given a green light to fly over US airspace; to track firefighting emergencies on US soil; to prepare for US hurricane  assistance; and the first unmanned aircraft to provide immediate pinpoint intelligence for a major international disaster like Haiti. There may be competitors on the horizon, but America’s very own Northrop Grumman has created the most mighty hawk of all. 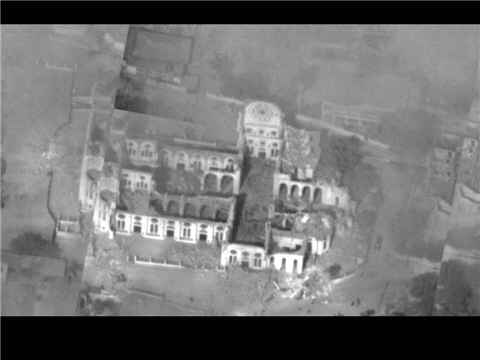 Show Highlights: Ed Walby explains what the Global Hawk  can do, how the Global Hawk is different from all the other unmanned aircraft systems and how it compares to the manned U-2 spy plane. He discuss the deployment of Global Hawks  overseas and describes missions conducted abroad. What types of non-military, domestic missions have Global Hawk supported? How many Global Hawk versions exist and what are the differences between each of them?

What important milestones are in store for the Global Hawk and for Northrop Grumman’s other unmanned systems?

“A day after the earthquake in Haiti, the Air Force had a Global Hawk Block 10 ready to deploy in support of Haitian operations. We flew from California, parked over Haiti for 12 hours and landed in Maryland. We would have had to move the manned U2 to Florida. Manned aircraft can’t stay on station for so many hours. We didn’t have that capability before…

“The Air Force is going to produce 77 Global Hawks. It’s all about preparing for the battlefield and protecting and supporting the troops on the ground. Almost every image we take is as precise as possible. There is a great deal of calculation taken into to hitting only the target you need to hit and to reduce anything beyond that. You would be amazed at what lengths the military goes through to ensure that only the target that is sought after is taken out.”

On Jan. 13, a U.S. Air Force Block 10 Global Hawk was diverted by the 12th Reconnaissance Squadron at Beale Air Force Base from its trip en-route to support usual wartime operations in Afghanistan to assist in relief efforts after Haiti’s 7.0 magnitude earthquake on Jan. 12.  A Global Hawk took off from its main operating base at Beale Air Force Base, flew to Haiti, and provided 12 hours of coverage over the disaster area before landing at Patuxent River Naval Air Station, Md.  Subsequent missions were launched from Maryland to provide 14 to 16 hours of persistent watch over Haiti before landing back at Patuxent River.

“Not only has Global Hawk helped determine the extent of damages and usability of Haiti’s infrastructure, it has also helped to find and recommend roadways and airfields accessible for delivering emergency supplies and rescuing injured and trapped people,” said George Guerra, Northrop Grumman vice president of high-altitude, long-endurance systems.  “We are committed to supporting the ongoing relief efforts in Haiti for as long as necessary to help rebuild the lives of those affected.”

The Global Hawk team collaborated with other agencies to assist in all aspects of recovery and relief.  Officials and analysts from the U.S. Southern Command in Miami, the 548th Intelligence, Surveillance and Reconnaissance (ISR) Group from Beale Air Force Base, the 480th ISR Wing from Langley Air Force Base, and the Naval Air Systems Command Broad Area Maritime Surveillance Demonstration program from Patuxent River helped provide critically needed imagery and information.

Capable of flying at altitudes up to 60,000 feet for more than 32 hours at a time at speeds approaching 340 knots, Global Hawk is equipped with an integrated sensor suite, which includes synthetic aperture radar, electro-optical and infrared sensors. Global Hawk has supported previous humanitarian relief efforts, including the southern and northern California wildfires in 2007 and 2008, respectively, as well as Hurricane Ike in 2008.