Teams of volunteer doctors and staff nurses provide free, mobile, patient-centered medical care to women and children in and around the Boston area.

Dr. Means, a practicing internist, believes that society’s neediest women and children deserve accessible and compassionate health care, and should not have to sacrifice scarce cash, safety, warmth and food to get basic medical help. WomenofMeans.org is celebrating it’s tenth anniversary with a “Taking it to the Streets Campaign.” If you can assist in any way, please phone 781-239-0290.

Women of Means is the largest volunteer group in Massachusetts. Their mobile units of doctors and nurses – representing multiple specialties – do not charge a dime. Volunteers donate personal time and services for at least a year. Their combined services total over $500k in any given year. Most have been with the organization for 8 years or more. The group is funded solely through grants. They do not receive money from – or work for – specific shelters. 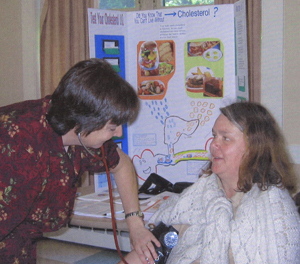 She’s an Associate Clinical Professor of Medicine on the Harvard Medical School faculty, where she teaches and mentors medical students and residents about poverty medicine, access to care, health policy and social justice – and has performed relief work in Appalachia, Southeast Asia and Latin America.

Dr. Means has written/lectured extensively on homeless issues and is a strong advocate/consultant for the unique needs of homeless and marginally-housed women. She’s been recognized for distinguished community service by the Massachusetts Medical Society, Health Care For All, MIT Alumni Association, Tufts University Alumni Association, and Harvard Medical School, among others.  Women of Means is a 2004 Citizens Bank “Community Champion” and received the 2006 Governor’s Point of Light Award.

In 2008, Dr. Means received the first CVS/Caremark “Heroes in Women’s Health” award and was also awarded an honorary Doctor of Humane Letters by Babson College in recognition of her entrepreneurial leadership.

Women head up 90 percent of the families that use shelters. According to Dr. Means, the majority of women who become homeless either stayed home to raise their children and were then left behind, are divorced and/or lost their home. A third of the homeless are women and children, and the numbers are exploding  – while shelters are closing.

Ninety percent of homeless women report emotional or physical trauma before or after they become homeless. All Women of Means patients report physical assaults since becoming homeless. Some patients have as many as 30 medical problems and eighty percent have multiple diagnoses.

Many women facing homelessness would rather go it alone, in order to avail themselves of single adult shelters. To do so, they’re forced to give up their children to foster care or let them be raised by a family member. Women running away from batterers often make the choice to leave children with the batterer in order to save  their own lives. “We have more animal shelters than shelters for abused women,” says Dr. Means. “There are 25,000 homeless in Massachusetts, and 3000 women in Boston are homeless.”

The program could be duplicated in other cities at low cost – if Washington was paying attention!

“We’re small because we don’t charge for our services. We rely purely on grants and have almost no overhead. It does take a great deal of coordination. We have a medical director and a very active medical education program for doctors and nurses – the only program that brings them together. We have over 150 medical students, nursing students and medical residents who come through our program every year.”

“Eight percent of the people we take care of are over 70 years old. They find themselves in the twilight of their lives sleeping on a cot. It’s an exploding demographic. If a person has a chronic disease but is not monitored closely, she/he will end up in the emergency room – sicker than the person who has accessible medical care. We’re proactive and preventive – trying to keep them out of the emergency room and to keep them stable.”

The Center for Women in Politics and Public Policy at the University of Massachusetts McCormack Institute reports that on an annual basis:

• About 20% of these individuals are women.

• Another 3,000 stay in domestic violence shelters.

• Up to 50% of families seeking emergency shelter are turned away.

Homeless women face a myriad of challenges in trying to manage everyday life. Homelessness impacts their ability to focus, organize or follow through on primary and preventive health care. Isolation, poverty, shame, exhaustion, humiliation, and cognitive and mental impairment are some of the many barriers that get in the way of asking for and receiving help.

The most common medical issues that Women of Means addresses in the shelters include:

With prayers for your health and economic security….