From David Ben-Gurion, Shimon Peres, Golda Meir and Yitzhak Rabin to Menachem Begin, Yitzhak Shamir and General Ariel Sharon. Candid interviews with Israeli giants and key players on the U.S.-Israeli relationship — dramatized by over 70 historic photographs of Israeli and U.S. leaders in “Kodak” moments. Providing critical insight on the human divide in U.S.-Israel relations, the book underscores strengths and weaknesses in the American-Israeli alliance. 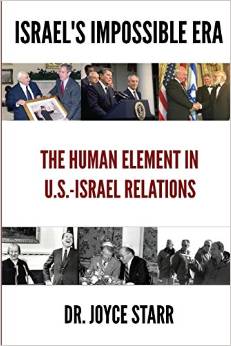 We do the Impossible!

Discover what Americans and Israelis really thought about their counterparts during Israel’s Impossible Era. Survival, peace and dreams were at stake—an Israeli yearning for commitment versus American demands for respect. Shouting to negotiate. A zest for life versus “a cold, robotic approach.” “Why can’t you bend your mentality?” “Israelis are awful, but Americans are vicious.” “We need it, so why can’t you just give it to us?” An essential guide for government officials, politicians, the business community, and Israel supporters or critics.  Purchase Now on Amazon.com

A U.S. diplomat descends into a fistfight in Tel Aviv (and enjoys it). An American negotiator nearly has a heart attack during a tense session with Ariel Sharon. What really happened when the Jonathan Pollard spy scandal broke? (Not what you think.) Secretary George Shultz invited Prime Minister Shamir to his home for a breakfast of pancakes. What could go wrong? (Hint: The peace process.)

Who did General Sharon call a supercilious American WASP, while giving him a gift? Why was Menachem Begin so admired by American diplomats? Yitzhak Rabin warns that Americans have no sense of humor. Shimon Peres reflects on achieving top marks in New York’s New School courses when he was first learning English. Blending biographies, photographs and autobiography, this work will bring back a rush of memories for many.

Author Dr. Joyce Starr directed the Near East Studies Program of the Center for Strategic & International Studies (CSIS) for more than a decade. A life-long Independent, she served in both Democratic and Republican Administrations. Joyce has advised Israeli universities and international think tanks.