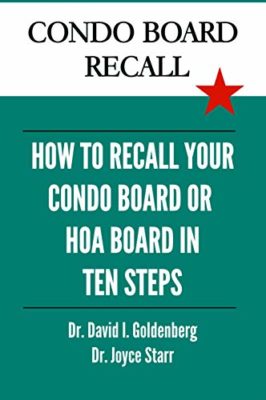 How to Recall Your Condo or HOA Board – or Individual Board Members – in Ten Steps!! Buy Now on Amazon, Apple, or Barnes & Noble.

A slew of companies have popped up offering to help boards impose liens on condo & HOA owners for a myriad of reasons. Condo boards/HOA boards can destroy a an owner’s life in a few hours – few questions asked – for less than $250.

The Board that I was in hot dispute with in 2002-2004
was led by by a crew that crushed community spirit and input,
delegated tasks arbitrarily without full disclosure, played favorites
with some neighbors, discriminated against others, and totally ran the
HOA Board like the wild, wild West.

According to the N&O story that appeared in Jan/Feb 2005, the treasurer was involved in embezzlement activities in his business dealings, yet he was not audited or questioned about the HOA monies which he was in charge of for a number of years.

If you look in the N&O you will see the story about him and
his affairs outlining a federal indictment. He really appeared to
lead the Board and appeared to have the management group entwined in
the whole conspiracy to ramrod me and others if any questions were
asked or input given contrary to his or others rules. These tactics
and futile efforts to solicit cooperation with the Board forced me and
others to leave. Perhaps I asked too many questions about the
maintenance costs, attended too many meetings, or even had the
audacity to ask to speak about maintenance and community issues. When
I pulled out the tape recorder, I knew I would be dead meat in that
crowd. To me, the Board acted like a posse out to hang someone or run
someone out of Dodge. Being a single female approaching sixty, I was
their perfect victim; old, lacking a male counterpart, and not in
their clique.

The president at the time was quite arbitrary and demanding to me and
her demeanor really intensified when I took the initiative to ask why
deck permits were not obtained and why my deck was condemned by the
Town of Cary for shoddy work done by their maintenance guy. She made
it very clear that I would be paying for that action (talking to code
people) in terms of payback. I perhaps painted a target on myself for
the Board members to attack when I questioned why the work on the
decks was not approved by building codes. It appeared the Board was
not prioritizing safety issues since many of the decks were quite
elevated and needed structural integrity. The emails I received from
the Board revealed the extent of their animosity and venom as well as
those of the management group.

I reported all of this harassment and terror tactics to 5 on your Side
and other news networks, even had an article written in the paper,
News and Observer, and appealed to the Attorney General’s office
consumer division. The AG did send a letter to the management group,
but the owner/manager appeared to fluff that over and somehow avoided
any repercussion or consequences. To me, it had become an ethical and
moral issue at this point, certainly reeking of conspiracy and decay.

But in the end, the HOA Board sliced and diced me even when I tried to close my house. They continued the siege and torture of me and my property by overcharging my dues and tacking on the deck costs which was their responsibility in the closing statement at the sale of my townhome. By the way, no charges were made to other homeowners who had deck replacements. I should not have been charged and billed repeatedly for the deck as was done. Decks were the HOA responsibility as stated in the rules and regs of the HOA. I was also charged for HOA dues at closing that had already been paid, but because I had moved and could not keep fighting a lost cause, I closed and suffered the financial losses.

The whole residency in that complex was a nightmare and took a toll on my life, my health, and made me committed to a promise never again
to live in a community with a HOA Board. When I complained the deck man they used had a criminal history, they continued to support that
person, who is still doing their decks and maintenance to this day. When I asked that he not trespass on my property, the management group
and the HOA Board backed him and not me, allowing him to continue working on my property. This was after I asked in front of multiple
witnesses that he stay off my property due to his negligence and prior conduct.

I was the victim, others are the victims, and will continue until
these Boards are addressed, their criminal/civil activities are
reigned in and punished. Until this is instituted with legislation and
oversight, the community members will continue to suffer financially,
mentally and physically, as well as targeted socially in the
community. These Boards are rogues who rule the neighborhoods with
total disregard for homeowners and their investments.

I always think good will prevail and that acts will be punished. I
moved away and the next year found out that the HOA Board was
replaced, the treasurer was convicted of financial crimes, and the
decks were finished with proper permits.

But, a new Board has emerged, the same deck man is still working and
supervised by a relative, who was appointed arbitrarily by the current
Board to a quasi manager position with little or no input from the
neighborhood. So life continues, HOA Boards change members, but not
practices, and the terror remains rampant in these communities. HELP
these people! They may as well live in a third world country dictated
by ego maniacs and power mongers!

Please consider regulations that will have teeth, a regulatory Board
to regulate the Boards, and consequences for the criminal or civil
violations of these members of HOA Boards. I moved, but have
compassion for those who cannot move due to age, disability or
circumstances beyond their control. It appears heartless to hear the
suffering, read the stories, and walk on by like it does not happen.
Family friends have lost their condos to solvable issues of back dues,
lack of positive communication from the Boards, or just plain slippery
slopes created by these Boards. It happened to me and it can happen
to you or some other unsuspecting homeowner! Don’t throw the newly
married homeowners, the elderly disabled, or the struggling families
under the bus! Buyers beware is always the motto, but these
situations emerge after the property closes and the buyer then needs
emergency measures to be in place. We need 9-1-1 in this case of
hidden problems which can’t always be determined by unsuspecting
property owners. Some say they survive by sinking their heads in the
sand and hoping they won’t be targeted, but that does not always work
either. We need to be able to dial 9-1-1 and get help from NC State
government and from the federal government for violation of citizen
rights and for the stalking, terrorizing, and damage these Boards do.