Dr. Joyce Starr on Mold in Your Condo

Condo Shower: I turned off the shower, but the water kept dripping. How could that be? It was a new shower head, tightly installed. I looked up. To my horror, the ceiling looked like a cow’s udder – a big sack of water threatening to explode. I envisioned sackfuls of water pouring into my bathroom and possibly to the units below.

Although this happened on a Sunday, I called the building engineer, who, to his great credit, arrived within 45 minutes. He pricked the sack and out flowed a bucket of water. I asked him to cut away the sack – a thin layer of paint – so that we could determine the cause. To my shock and horror, a circular area was covered with black mold. He soon learned that the upstairs neighbor had cracks in her shower pan, which damaged a pipe underneath the pan and thus resulted in leaks and mold.

According to our Continental property manager, the 5-foot vertical pipe underneath the pan is the owner’s responsibility – which makes it an owner-to-owner dispute.

The property manager refused to visit my unit to assess the damage first hand – perhaps fearing exposure to the mold – although she did urge the owner to fix it. She also refused to provide the last name of the owner (who resides in New York), stating that the owner did not want her contact details revealed. It’s fairly difficult to contact an owner without a name, let alone an address. The owner has a tenant, who might decide to use the leaking shower. If so, further damage to my unit is guaranteed.

My ceiling cannot be repaired until she fixes the problem at her end. Therefore, it’s obvious that the two parties must be in touch. Can a property manager protect the interests of one owner (literally) above another? And to what purpose?

Lesson 1: Check your shower pan for cracks – before you destroy you neighbor’s unit below. Lesson 2: If your condo bathroom ceiling is leaking – even tiny drops of water – don’t ignore it. Lesson 3: Check your documents regarding vertical and horizontal pipes. Lesson 5: If the property manager refuses to visit a damaged unit and/or refuses to provide the last name of the owner to the victim, this may be a sign of much bigger problems ahead – with your property management company. 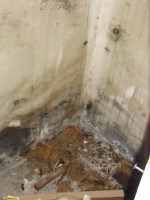 Mold Discovered Behind My Kitchen Cabinets

It wasn’t the first time we discovered mold in my unit. Three years earlier, a pipe burst in behind one kitchen wall and on another occasion, the boiler backed up on the roof. Water sprayed from my kitchen ceiling, showering the walls.

The cracked shower pan and mold were my neighbor’s responsibility, and she quickly agreed to pay for remediation (or so I thought).

The first week dragged into a second, then a third…while she dragged her feet. She didn’t have homeowners insurance and wasn’t eager to spend the money – including the required city permit to make alternations in her bathroom.

I understood her financial dilemma, but meanwhile the mold continues threatening my health/life and unit.  My insurance company stepped in months earlier. A second claim in one year could result in cancellation of my policy.

WHO IS RESPONSIBLE? A burst vertical pipe or backed up boiler is the condo’s responsibility. Here’s the rub. The condo is only responsible for outer dry-walls, which they eventually replaced. But inside walls – those pesky walls holding up your kitchen cabinets, are your responsibility if you live in a condo.

Condo Insurance Companies: The condo insurance representatives assured me that my kitchen walls were dry, and there was no mold. I insisted they were wrong. I could smell and sense the mold. It was a stand-off. My insurance company also sent an adjuster, who determined that there was no lasting water damage and thus no mold.

The only way to get to the truth was to remove the cabinets. But it was physically impossible to remove just one cabinet. All had to be replaced – or none. Who wants to launch a kitchen remodeling project during a recession? It was a difficult decision – and process.

I finally removed the cabinets at my own expense.

How do I describe the wall to wall canvas of black mold that emerged? The engineer and property manager were shocked. Consider: The mold wasn’t sticking around my apartment. It also threatened units above and below. Within two days, the same condo insurance fellow returned. He was visibly embarrassed, but said little. So much for those humidity testers insurance adjusters carry around in their pockets. After several calls and emails, my insurance company agreed to reopen my case. They sent a new adjuster, and he too was taken aback by the mold.

I’m convinced that my health was protected by four dollar tree plants that remained in the kitchen throughout this 3-year period. Whenever I tried to move them to a sunnier area in the living room, they looked sad and wilted. Why would plants prefer a windowless kitchen? It was beyond me, but that’s where they remained. While they hardly grew, once the mold was removed, the plants sprouted to twice their size. If only plants could speak. Were they shielding me?

Lesson 6: Don’t believe what insurance adjusters tell you. If you think you might have mold behind your kitchen walls, remove a cabinet or two to find out – if possible. Your health and life could depend on it. Lesson 4: Be prepared for a very long and trying ordeal. I suffered from mold in the kitchen for 3 years because the adjusters didn’t do their job – or perhaps they did their job, meaning found a way not to pay.

Lesson 7: If you’re suffering from mold, surround yourself with plants. Lesson 8: Listen to your plants when condo insurance experts insist that there’s no mold.