Did a Condo Attorney Fail to Advise the Condo President and Board about “The Freedom to Display Flag Act of 2005” and/or the Related Florida Statute? 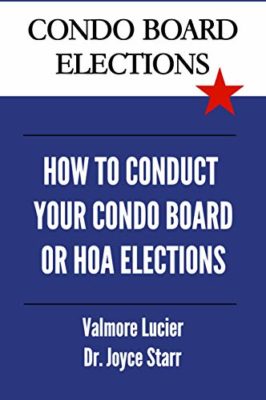 A Florida condominium association board took co-owners to arbitration in 2017, because they raised the American Flag on their limited common element after Hurricane Irma.

The arbitrator eventually told both attorneys they could legally fly the flag, and if the location was an issue, it should be decided through mediation. If mediation was unsuccessful, it could go back to arbitration or directly to court. Both parties had to agree. The condo owners opted for court, and the association opted for arbitration. Then the board dropped the issue.

The condo owners were not reimbursed for their legal expenses, since the case was dropped.

They told Rights Radio: “Condo boards have an unfair advantage over owners. They can create legal actions against any owner without spending a dime of their own money. And, even worse, if they choose to drop a legal action that they initiated – as they did in our case regarding the American Flag – they put zero dollars of their own money at risk. If a board member has a personal vendetta against a particular unit owner – as our board president has done – then he/she is able to fund such action with unit owner’s money. In our case, precious funds that were intended for hurricane repairs and building maintenance were instead used for a board member’s personal agenda.”

But Here is the Question!

Did the condo president or the condo board attorney bother to read the “The Freedom to Display the Flag Act of 2005” (below) – passed on July 24, 2006 – let alone Florida Statute 718.113(4)? Had they done so, this frivolous legal action could have been avoided. As the arbitrator informed both attorneys that the condo owner could legally fly the flag, we conclude that the condo association attorney either failed to research the issue or intentionally failed to inform his client about such legal rights. 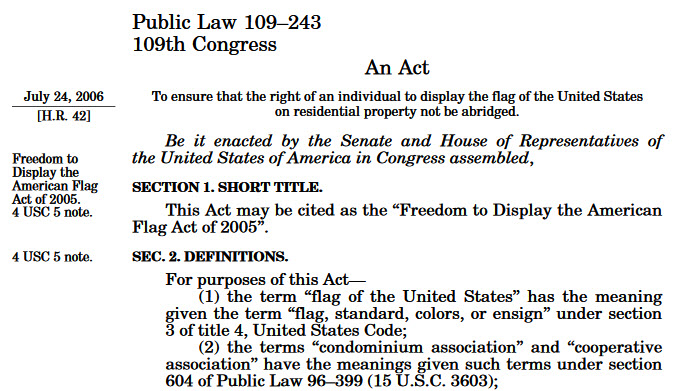 Florida Statute Section 718.113(4) states that a condominium “unit owner may display one portable, removable United States flag in a respectful and, on Armed Forces Day, Memorial Day, Flag Day, Independence Day, and Veterans Day, may display in a respectful way portable, removable official flags, not larger than 4-½ feet by 6 feet, that represent the United States Army, Navy, Air Force, Marine Corps, or Coast Guard, regardless of any declaration rules or requirements dealing with flags or decorations.”

The president of this condominium association is allegedly both a snowbird and a non-US citizen. Should non-citizens and/or snowbirds be permitted to serve as condominium or HOA presidents? While Florida law does not prevent such service, a number of Florida condos and HOAs include such restrictions in their original or updated Documents.

Dr. Joyce Starr founded Starr Publishing in 2007, including DrJoyceStarr.com and Starr Publications.com. She founded Rights Radio in 2008. She has authored over 20 books - many on rights-related topics.

50 years since #RFK died and now they despise@RobertKennedyJr for calling out lies. Oh but they loved him when he saved the #Hudson & fought those nasty #pesticides. Speak up, shut up. History will decide. [FYI: RFK Jr. is founder @ChildrensHD & co-counsel #Roundup litigation.]