You are here: Home / Health Rights / Cigarette Addicts: How they Rob Your DNA & Threaten Your Life

We’ve been suffering from secondhand smoke assault for over two years. As a result of our complaints – and efforts to educate – our Board is now requiring all new owners and renters to agree in writing that if they light up a cigarette, they will do so on their balcony. It’s a good start – proving that non-smokers can make a difference.

Unfortunately, this rule doesn’t yet affect current owners and renters, We hoped to change the documents in 2011. We succeeded in 2012!). 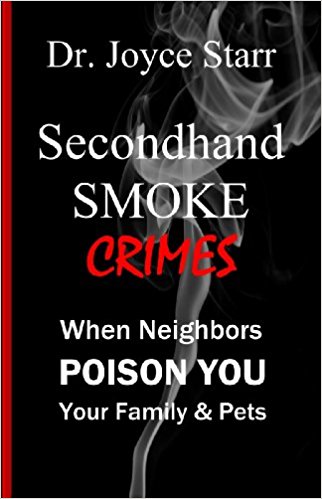 Neighbors are beginning to realize that their lives are also on the line. An ardent foe (living on a line soaked in smoke) died of a sudden heart attack. The former Board treasurer – an addicted smoker – who used every device possible to block our efforts – is dying from her addiction, now just a shadow of the person she used to be.

How can I convey the daily revulsion when entering and leaving my home through a fog of fumes and toxins – a gift from the smoker addict next door. Your nervous system goes into overdrive just to cope. Words are inadequate to express the powerlessness, shock, horror – knowing that a vile neighbor is joyfully reducing the years and quality of one’s life. Your throat aches, your heart muscles tighten as the body goes into flight/fight mode.  And there’s nothing you can do – but continue to educate, move or sue.

The smoker is also killing himself (according to his doctor), his son (who lives with him) and their guests. He doesn’t care.

Florida International University recently announced that cigarettes would no longer be tolerated on campus. Not even in cars. Bravo! Many campuses are doing the same. Aren’t they afraid of lawsuits? Surely so, but wise educators realize that the nature of this crime is worth the risk. Caught smoking in a car or anywhere on the grounds, a fine will follow.

While Florida’s state representatives – Democrats & Republicans – are still in the cowardly grip of the tobacco lobby, smokers are being treated as petty criminals by braver states across the union.

Given what we ALL know today about the effects of secondhand smoke, those who light up in front of others – particularly children – are selfish, abusive and heartless individuals. Those who enable smokers are only one step away.

But when enablers are also in the healing profession, it boggles the mind. Here’s an example.

I was walking towards the elevator when the smoker’s son and the son’s apparent girlfriend appeared. It was a terrible week. The fumes were unbearable. I was coughing and choking daily. Visitors to my unit commented on the hideous smell in the corridor. My neighbors were suffering as well.

I had not spoken a word to the 30-something son in over a year. However, out of despair, I asked that he convince his father to smoke on the balcony. The girlfriend – a big woman, standing about 6 feet in heels, put her hand in my face and says, “Enough. We’ve heard enough from you.” I never spoke to the woman before. I had no idea who she was at the time. When I tried to say more, she was literally “in my face” – both physically and verbally aggressive.

I later learned that she’s studying to be a NURSE! I can only hope that her immune system protects her body as fiercely as she’s protecting daddy smoker.

I’ve known many smokers over the years and thought of most as nice people. Some of my closest friends were smokers. That was then; this is now. I now see smokers in a new light – as DNA robbers.

The Surgeon General of the United States, Dr. Regina M. Benjamin, issued a report on Dec. 9 stating that inhaling just one cigarette a day could be enough to cause a heart attack and even death.

“The chemicals in tobacco smoke reach your lungs quickly every time you inhale, causing damage immediately,” Benjamin said in a statement. “Inhaling even the smallest amount of tobacco smoke can also damage your DNA, which can lead to cancer.”

And the more you’re exposed, the harder it is for your body to repair the damage.

Smoking also weakens the immune system and makes it harder for the body to respond to treatment if a smoking-linked cancer does arise.

The report said that tobacco companies deliberately designed cigarettes to be addictive and that they released new products portrayed as safer that were in fact just as dangerous and addictive. A third of people who ever try cigarettes become daily smokers, according to Dr. Benjamin.

The report also noted that cigarettes kill 443,000 people every year in the United States — one in every five people who die from cancer, heart disease and other causes – resulting in more than $193 billion annually in health care costs and loss of productivity.