You are here: Home / Economic Rights / Thwarted Hope: When the Mice are Us – The Grand Experiment

Are Americans unwitting players in a grand experiment? When the mice are us.

To help pay for graduate school, I assisted a psychologist who ran experiments with white mice.

It wasn’t very long before I felt even more upset for these little creatures than for myself.

It was a terrible experience. My job was to document their response to frustration, hunger, shock and abuse.

The scientific goal was to so decimate their spirits to such an extent that even when food was presented, the mice were too traumatized to eat. They couldn’t do anything right, because right instantly became wrong – an ominous parallels  to  how  a  large segment of the American public is feeling these days. 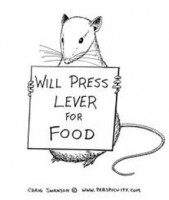 No  matter which  direction  we go, there’s a shock waiting.  We’re hungry for hope, but hope eludes us. In  fact,  a  growing segment expects the proverbial tomorrow  to  be  worse  for  themselves  and  their children, not better.

Not so the mega-billionaires, because…how do you lose a few billion?  Not so the mega-wealthy who have more than enough to carry them (and future generations) through, including the 50 richest Members of Congress and senior executives in Wall Street “bailout” firms.

Not so corporations – because, as proven during the recession  – corporations make money and increase their stock price by cutting jobs or sending them overseas.

No so government  workers and those on the public gravy  trains. Government white collar workers now bring home twice the pay of their private sector counterparts. Tens of thousands of city workers across the nation received raises while services were being cut.

But here’s the point. If you’re stuck in a cage – shocked,  abused,  starved of hope – it’s  because someone with substantially more power dumped you there and locked the door. One day, you’re a free mouse/person, and the next day you’re part of a grand experiment.

Hungry for a new  home? A new car or home? We’ll dangle a meaty tax break. A loan modification? We’ll give you a  fat  illusion. Health care? We’ll give you a plan that  you  can’t  understand, raise your health care rates and eliminate excess calories from your life.

We’ll raise food prices and the cost of living and convince you that life is getting better.

We’ll  give your tax money to groups who declare their allegiance. Pretty soon, you’ll  wise  up. You’ll  take  the right path, and we’ll even let you pass  through to the next flap of the maze. We’ll give you  a bit  of nourishment, water your soul before  it completely dries out. And then, just when you  think hope is truly on the horizon, we’ll shock those  little  paws of yours so badly that you will never dare question us again.

The  question is: What can we do for people so stuck in the maze,  so demoralized, so hungry for hope/home/jobs that they no longer remember who they were?

To those who can still fight back….