You are here: Home / Economic Rights / Does Social Networking Give Productive/Creative Loners a Bad Rap?

The term “loner” once suggested the self-confident, silent type who said little but knew more than he/she let on. A person of few words who got the job done. An achiever, a person with a rich, goal-oriented inner life – one that you could trust, a “true” friend who wouldn’t blab your secrets.  Today, non-socially networked men/women are readily tagged as socially inept losers – people without a “platform” or “friends.” Non-socially networked loners are viewed as “less than,” when most offer more than social media scores can possibly gauge.

Andrew Lloyd Webber, the most successful songwriter/playwright of our time, declared on Piers Morgan’s CNN show that he doesn’t own a cell phone and only sent one email in his life – which he actually dictated to someone else to send. Andrew Lloyd Webber doesn’t do social media.

Are you a non-socially-networked (NSN) individual? Are you a productive/creative loner? Do you feel that social networking is giving people like yourself an unwarranted economic disadvantage? 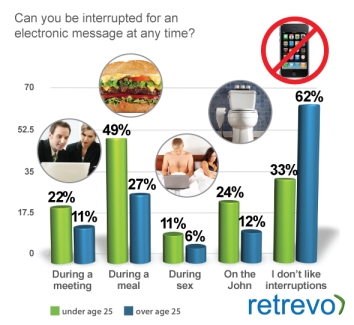 A recent CNET Networks post by by Elizabeth Armstrong Moore caught my eye.

Only a few years ago, I could shock people by divulging that I don’t own a TV. Since Hulu and others let me get my show fix online, I now seem to be part of a growing minority who only have one kind of box at home. But I still shock people. All I have to do is admit I’m not on Facebook. According to most people I talk to, at least, this is truly strange behavior.

So it’s not surprising that so many people rely on social media, for both work and play, every day–a statistic highlighted in the latest Retrevo Gadgetology Report on social-media usage…More than half of social-media users report needing to check Facebook at least once every day, and more than 10 percent say they have to log on every few hours. Of course, iPhone users are even more attached at the hip, with more frequent usage than any other group in the 1,000-person study.

Some of my best friends are not socially networked. They’re too busy earning a living and/or being creative/productive. To quote one individual, who – for obvious reasons – wishes to remain anonymous:

My immediate reaction is to repeat the classic line given to Rhett Butler at the end of Gone with the Wind, (“Frankly, my dear, I don’t give a ….”)

Seriously, I’m not in favorably predisposed toward computerized social networking. To me, it’s just an annoyance and a threat. It’s an annoyance because dealing with it forces me to waste precious self-depleting time. It’s a threat to my work and to social progress.

Social networking is a threat to the economy because it encourages people to waste time gossiping that otherwise could be spend productively. I am, of course, in favor of social discourse on a limited basis with friends and colleagues, preferably in person or, if need be, electronically via the telephone, fax or even the Internet.